The Northern Forts was build in the period 1886 to 1894. From the Utterslev Moor and towards Öresund in the north, a chain of 5 forts was constructed.
Thye sixth fort,The Taarbäk Fort, was build in 1914 both to support the other forts, but also as a coastal battery.  .

All the forts , except the Garderhøj Fort was triangular forts. Its is the easiest shape to defend.
In the backside of the fort, the throat, there was casemates and a caponiere. This enabled flanking fire to protect the fort and the moats around it. Some of the casemates facing the throat pit was for the crew, kitchen etc. On the other side of the central corridor the fort’s ammunition magazines were situated. 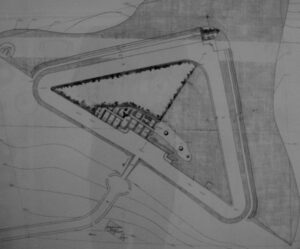 The northern forts had an approx. 10 meters wide moat lying like two flank graves and a throat pit. Slopes were bare, but the body of the fort was surrounded by a 1 ½ meter high concrete wall on which was mounted a high iron grid. The grid at Bagsvaerd Fort is the only one that exist today. All the forts had a caponiere, from where the moats could be covered with flanking fire.
At every  fort there was a glacis, from where an infantry defense could be established.

Upstairs the casemates the artillery floor was situated. All guns were mounted in armored turrets. The largest turrets wits 15 cm. guns might be rotated 360 degrees  but not raised and lowered.

Some lighter turrets with eighter 15 cm guns or mitrailleuses was mounted in disapearing towers.
These could turn 360 degrees, and also be raised or lowered  as needed.

The Taarbaek Fort, (Coastal battery as well as a land Fort)