The Fortifications of Copenhagen

The Fortifications of Copenhagen were some of the greatest in Europe over the years 1896 to 1894.
From 1894 to 1912 it wasn’t developed, despite it was obvious that it already was outdated from a military perspective. The fortifications were to close to the city to protect it against a bombardement.
But in 1894 it was politically agreed that the fortification should not be expanded.

The politicians had the old fortifications dating from the 17th century around Copenhagen demolished in the years from 1872. The ramparts and the moats made it impossible for the city to grow.

Since 1864 the defense of the country had been a hot subject in Denmark.
Large groups of both senior officers and politicians had discussed this subject, specially since 1872.
The debate became at times very fierce, and large parts of the population participated.

The government modernized the old naval forts and coastal batteries In 1880. They also commenced
the constructions of a new fortifications line in 1886. These constructions caused a democratic crisis, because there were no parliamentary  approval.

The government build the fortifications for the next eight years, and in 1894 the constructions stopped.
At this time 5  forts and a number of batteries and numerous other facilities ´had been built  new defense line, The Western Enceinte, was constructed about 12 km south west of Copenhagen.
At the same time some new naval and coastal forts and batteries was constructed for the naval defense.

15 cm artillery. Also the light artillery in the caponieres and the machine guns hidden behind heavy concrete walls were quite modern.
Unfortunately the military developments went very fast.
Just 20 years after the construction the artillery was technologically outdated.  The the long range heavy artillery made it possible to shell the city in a safe distance.  The fortifications were to big and needed too many men, and the concrete could not resist modern 42 cm. grenades weighing 900 kilos. 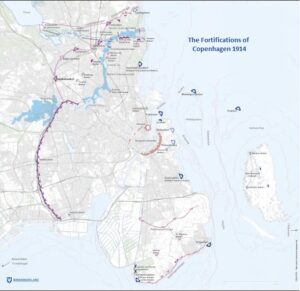 The Fortifications of Copenhagen 1914

The old fortifications and the new Tune stronghold

In 1909 a political agreement became the basis for a new defence line 30 km west of the city, the Tune stronghold. The army constructed the defense line in the area between the Köge Bugt and the Roskilde Fjord. This was the narrowest point on the island of Zealand.

The construction works started just after the outbreak of World War I. The army used the latest experiences from the first months of the war. The German long range heavy guns easily destroyed all the fortresses in Belgium and France. The forts surrendered simply because they were destroyed or because the sanitary conditions inside was to poor.
Trenches, foxholes and barbed wire replaced the imposing forts.

The army abandoned most of the fortifications in 1920.  Today you can experience a vast majority of the buildings.