The South Amager stronghold was initiated in 1915, the island of  Amager.
This was to replace the Tömmerup stronghold as the main battle line.
The Christianshavn Ramparts was now completely eliminated from the military plan.

As camouflage the majority was built  into the old sea dike between the beach and the agricultural area on the stretch from north of the forrest Kongelunden to south of the town Dragör. 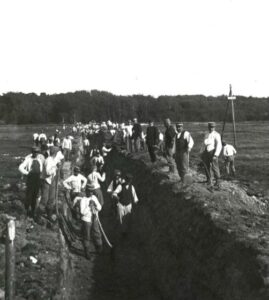 Trenches at the island of Amager

The stronghold was built in soil and timber and consisted of a 6 meter wide barbed wire barriers, barbed wire fences, batteries and infantry fortifications in the front line.  Further more there was remote batteries, command stations and reserve stands pulled somewhat back.

The batteries were mainly armed with field artillery in field positions. Some of the batteries in the front line were equipped with naval guns or modern coastal guns mounted on concrete emplacements.
Each battery had a cover room for 16 men and some kitchen facilities. Some batteries also had rooms for Pentamotors for operating the floodlights.
In addition, there was a telephone connection to the section command station.

To prevent landing and bombardement

The infantry was housed in bunkers, each consisting of covered seating for 64 men, a kitchen and sanitary room, as well as a telephone for the section command station.
At the end of the flanks was a pillbox for 2 recoilless rifles as well as accommodation for 4 men. The task for these was flanking fire of the barbed wire barriers. There was also was a 40 cm. acetylene floodlight and illumination cannons with associated rockets.

On each side of a bulwark was placed a trench with covered seating for 64 men. Each fortification with its two trenches formed a fortification section. The trenches had names or numbers.

To accommodate the crew, 5 camps were established.

The position was abolished together with the Tömmerup stronghold in 1919.